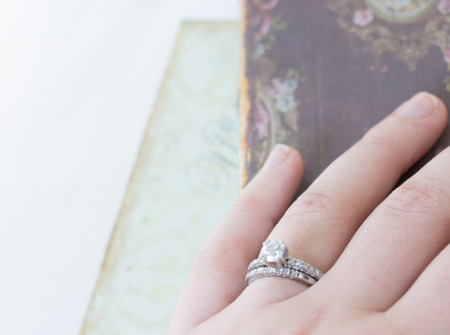 Ever wonder why you’ve been planning like crazy to incorporate these traditions into your wedding day? Check out these strange stories!

Exchanging wedding rings can be traced all the way back to 16th century Europe, where Christianity ordained the practice of incorporating rings into a declaration of marriage. The origin on the traditional diamond engagement ring can be most recently attributed to an ad campaign by De Beers in the 1930’s. The campaign proved effective, and created the diamond standard for engagement rings. Yikes, he did some damage!

The Wedding Dress and Veil

The bride’s wedding dress and veil is traditionally considered a lucky article of clothing. The gown would often display the bride’s status. A longer veil could mean a wealthier family, or a higher class position. Wedding dresses came in many different styles and colors until Queen Victoria of England chose to be married in a white dress. The trend caught on, and the white wedding dress continues to be in style. The veil was thought to protect the bride from evil spirits. It was also a caution taken by brides who hadn’t yet met their husbands-to-be. The veil saved the reveal of an arranged wedding. #Awkward

Picking a flower scheme has become a staple in wedding planning today. However, the tradition may have started in the middle ages, when brides carried herbal bouquets to ward off bad luck and (more importantly) the plague. Try switching your baby’s breath for garlic!

The bridesmaids were another battle against bad luck. The bridesmaids were traditionally dressed similarly to the bride so that the “evil spirits” would be confused, and not cause unhappiness to the new couple. The groomsmen were in fact body guards. The term “best man” refers to the best fighter, or best man with a sword. They were there to stop anyone else running off with the bride! (Or her escaping).

We play around with some strange wedding traditions these days, but we’re pretty sure you’d rather adhere to the newer ways. That is unless you want to be standing with swords at the ready in a sea of bridesmaids clutching you garlic and hoping your new husband likes what’s under your veil.