Wedding Venues You Need to Check Out in Greater Battle Creek

“I’ve been checking my weather app every ten minutes” she admitted. And though the bride-to-be was surprisingly calm, we could all hear the twinge of excitement in her voice, with just a hint of jitters for the day ahead.

I had to see the ring. It was beautiful, (see for yourself!), but this wasn’t just a custom ring we worked on.

This ring had a story.

The ring was created from her own mother’s engagement ring and wedding band.

Becca and Carrick met at MSU, and the two got engaged after dating for almost eight years. As Becca told us, “Carrick proposed with a piece of string…he knew I would want to pick out the ring myself”. Nicely done, groom, you know your lady.

So, Becca and her mother, Kathy, set off ring shopping. While perusing a collection of bands, the sales person pointed out that they would need to choose and purchase some diamonds. But before they could discuss it, Kathy suddenly exclaimed, “I have diamonds!”

“I was like, Mom, what?!” Becca exclaimed, as Kathy explained she had both her engagement ring and wedding band set with diamonds, but hadn’t been wearing it very often.

“I offered her the rings, and then I had to call her dad and tell him what I did”.

Becca brought the idea to Premier, where she and Richard customized a ring that would incorporate both her own design, and her mother’s engagement diamonds.

But the story doesn’t end there.

As Kathy is passing down her ring to Becca for her wedding day, her only request is that Becca passes it down to her own children some day.

“That’s the deal”, Kathy stoically explains. “It’s binding”. I would watch out if I were Carrick, his new in-laws are both lawyers, and the deal is a deal.

Jokes aside, passing down a ring through generations is a beautiful tradition. It feels like the sort of homage to family heritage that just doesn’t happen that often any more.

But for Becca and Carrick, this symbol of Becca’s parent’s 32 years of love will be passed on through their marriage, and even down through their children’s marriage.

Kathy also wanted us to mention that Becca is spoiled, (thanks, Mom) but the truth is that Becca is radiating with joy and gratitude. We think it may be Kathy that ends up being the spoiled one; her daughter will have her dream wedding, and get her well-deserved happy ending.

We wish Becca and Carrick a happy wedding day! Thank you for thinking of Premier! 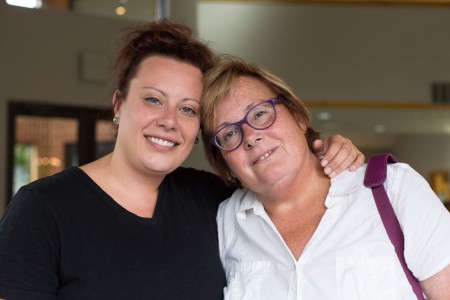 Wedding Venues You Need to Check Out in Greater Battle Creek